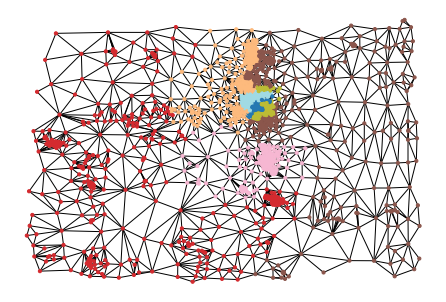 New state-specific requirements have emerged for the 2020 redistricting cycle that require additional examination before real-world application. In 2018, Colorado voters approved Amendment Y which added new language to the state constitution that requires the consideration of political competitiveness in the redrawing of Congressional district maps.

The goal of the following case study is to define and implement a measure of political competitiveness relevant for Colorado’s redistricting context. Part of this exercise will require us to wrestle with differing views on how to quantify political competitiveness. We add a layer of complexity by also prioritizing the minimization of county splits in all proposed plans to illustrate the way decision-making trade-offs operate within redistricting rules. The use of GerryChain allows us to generate an ensemble of potential maps that are constrainted by the state’s unique redistricting criteria and political geography. 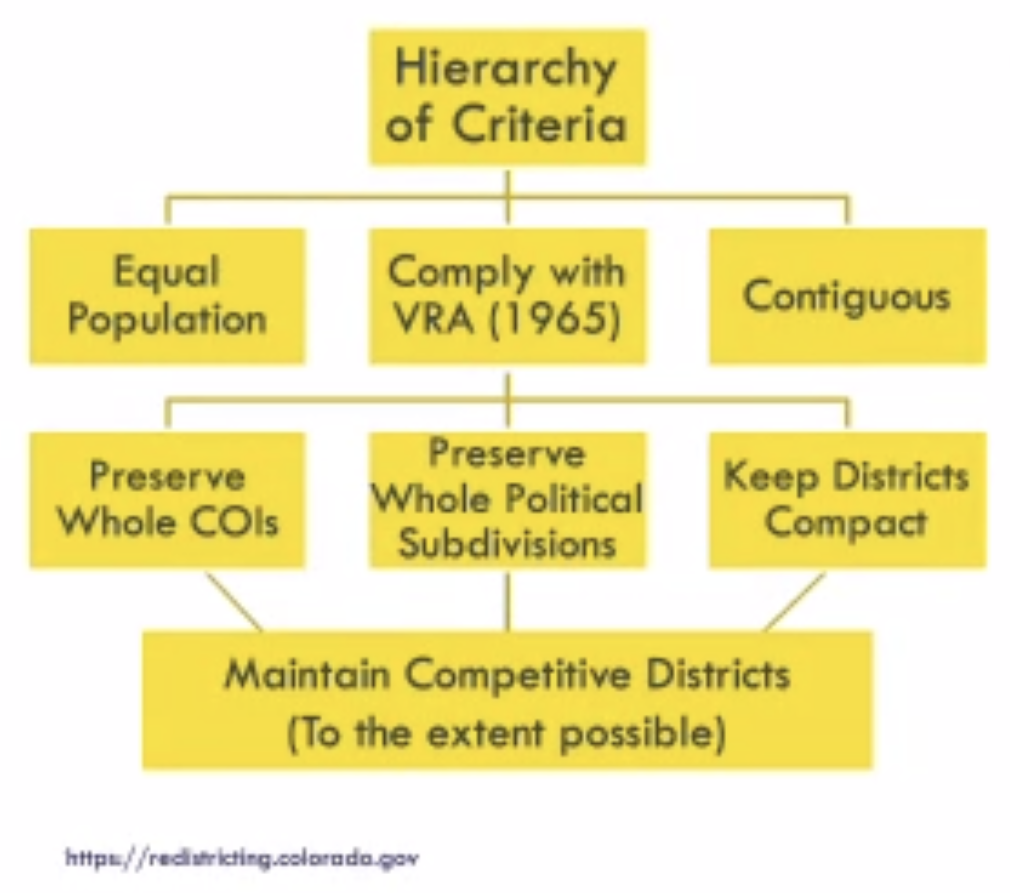 The application of political competitiveness is especially challenging under this hierarchical criteria structure. That is, not every criterion is treated the same. In fact, the most important level of the criteria outlines proposed maps must include equal population, compliance with the Voting Rights Act of 1965, and for all districts to be contiguous. After this first level of criteria is achieved, then maps should preserve whole communities of interest, preserve whole political subdivisions (e.g., county lines), and to keep districts compact. Only after these previous six requirements are satisfied does the redistricting commission consider political competitiveness.

After reviewing the literature and examining field-specific consensus, we focus our definition of political competitiveness through the vote band method. Clelland et al. (2021) and DeFord et al. (2020) both investigate political competitiveness using GerryChain, and conclude that a vote band of 45-55% is the simplest starting point. The vote band method has also been adopted by other organizations such as the 538’s Redistricting Tracker and Princeton Gerrymandering Project’s Report Card (Note: the Princeton Gerrymandering Project uses a narrower band of 46.5-53.5%)

Clelland et al. state that “a district is considered competitive if Democrats and Republicans both receive 45% to 55% of the combined Democratic and Republican votes (votes for candidates of other parties are not considered)… and [the vote band method] requires the fewest assumptions and will be most satisfactory for [their] analysis” (p. 13). We too adopted a vote band method of 45-55%, although we acknowledge that Colorado’s language to “maximize politically competitive districts” is highly interpretable and can take many additional angles. We chose to start with a more generous 45-55% band to maximize the number of competitive districts in our proposed maps.

In the past 5 US House elections in Colorado using the 2012 map, only 1 of the 7 districts each year was considered competitive. Using GerryChain and Colorado’s 2018 U.S. House election results, we specifically designed the Markov chain to only accept next steps in the chain that contain plans with both a greater or same number of competitive districts and fewer or the same number of county splits. We ran the chain for 20,000 steps and then graphed the number of competitive districts contained in each plan explored. We documented our model in a Jupyter notebook and final GerryChain script.

After running the model, we conducted an outlier analysis using a histogram to examine how the 2012 Congressional plan compares to the ensemble distribution. Results show that our ensemble mean is 3-4 districts (specifically, 3.75), which is 2-3 districts more than the 2012 human generated plan. 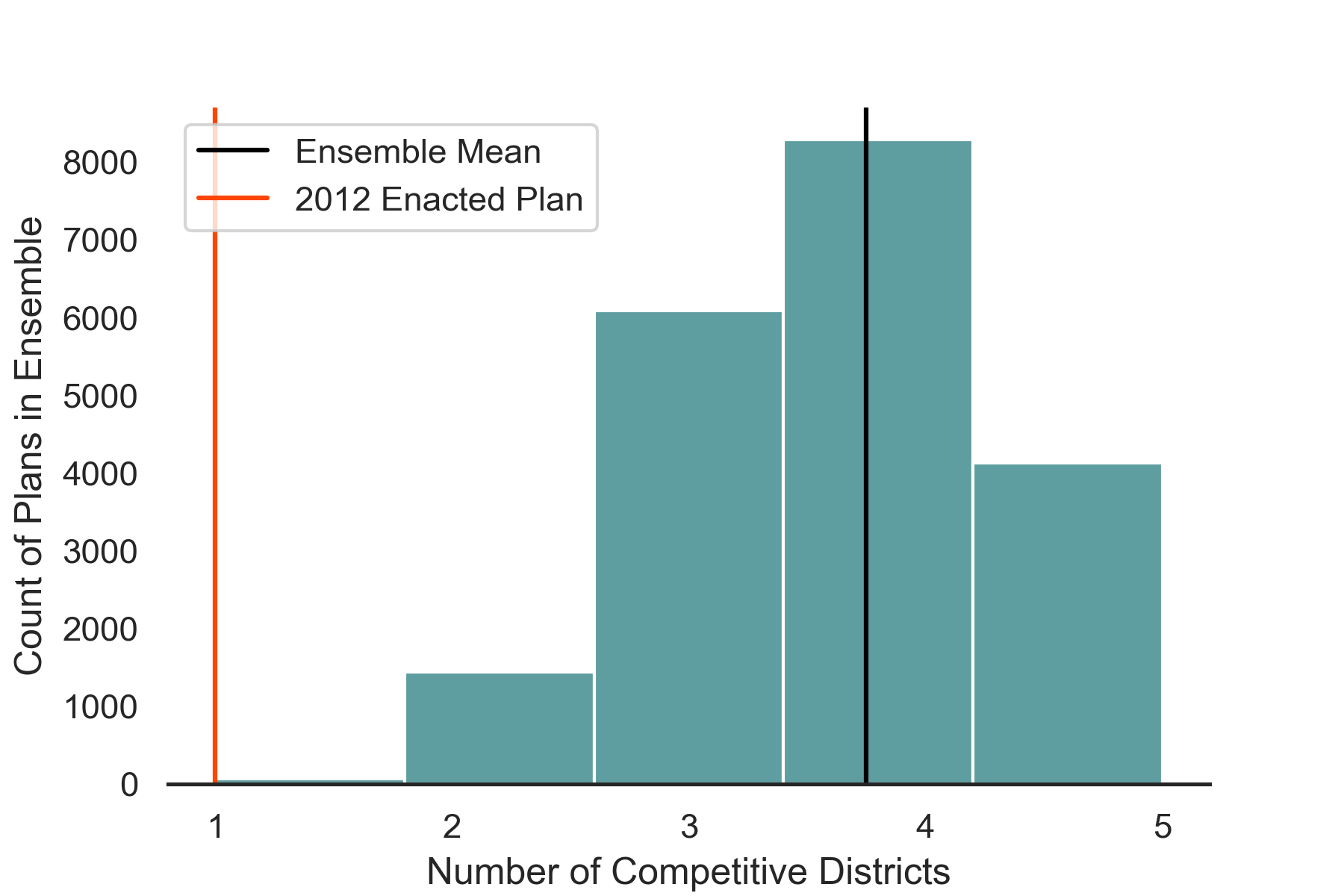 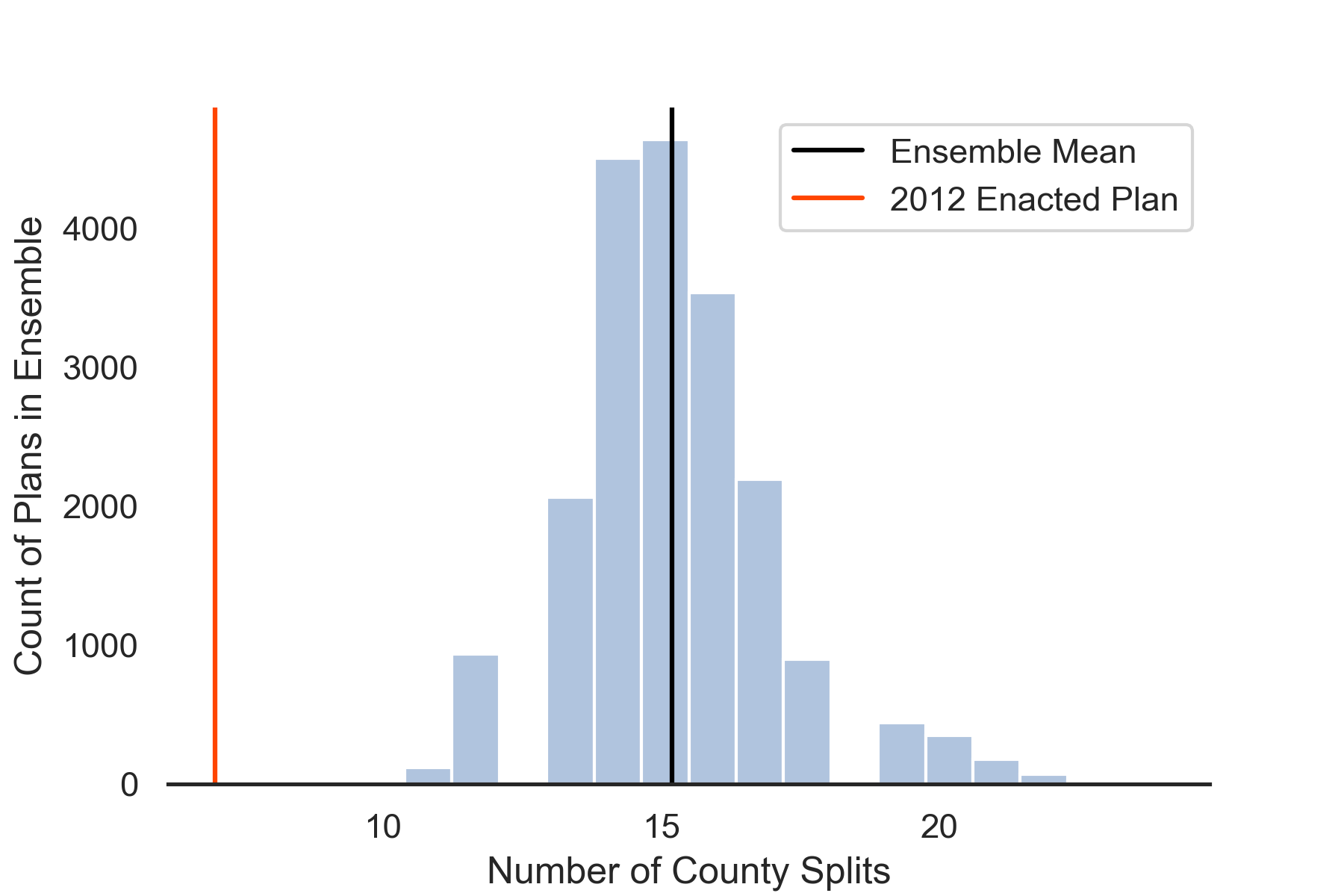 Our takeaway from this analysis is that Colorado Congressional district proposed plans that only contain 1 competitive district can be considered an outlier within the universe of potential plans, and based on the 2018 U.S. House election results, Colorado map drawers can aim to design maps that have up to 4 competitive U.S. congressional districts out of a total of 7 districts. However, balancing this condition with other redistricting rules requires trade-offs – that is, it may not be possible to maintain minimal county splits as seen in previous maps while maximizing politically competitive districts. Modeling requires human judgement and in-depth understanding of state-specific priorities, and our Colorado case study outlines a decision-making process that GerryChain users should consider as part of the process. Additionally, we wish to highlight the important nuanced discussion and debate on the value of political competitiveness (see, Deford et al., 2020) as a metric to enshrine into redistricting legal rules. Our analysis here provides one approach on how to apply this analysis in GerryChain, but the trade-offs that come with optimizing political competitive measures come at the expense of other important rules and measures of interest.

As Colorado is due to receive an additional U.S. House seat as part of the 2020 redistricting cycle – bringing their congressional districts from 7 to 8 – map drawers can also use GerryChain to decide where to selectively place new districts. Our Texas case study outlines how to evaluate the placement of new districts, specifically in compliance with the Voting Rights Act of 1965.